The Meaning of Prominent Druid Symbols

Druidry and druid traditions that have grown out of a recent revival of Druidry is an evolving, live tradition seeking inspiration from the past. It is also very unique to each individual as they walk their own path choosing to be bound by mutual respect for the living earth and the broader druid community. Many druids put together a crane bag in which they keep various magical tools, books, and symbols. Symbols play an important role in the lives of druids as they are used for magical acts and processes. There are druid symbols for healing, protection, love, compatibility and more. The following druid symbols are drawn primarily from sacred geometry and are carefully chosen when performing certain rituals:

1. The Pentagram and Pentacle These symbols are more than 5,000 years old and have been used for various purposes, but are mostly protective in origin. The five points of the pentagram are said to radiate protective energy outwards and is a good choice for invoking a blessing or as a druid symbol for protection for an entire country or piece of land.
The pentacle is said to contain protective energy within its five points that are surrounded by a circle. If you are creating a sacred space that you would like to empower such as a sacred garden or a stone circle, a pentacle would be a good choice as it will keep the energy contained within a space. Winding and unwinding spirals are probably the oldest symbols known to humans and can be found abundantly in cave paintings and carved into stones as far back as 8000 BCE. The spiral Celtic represented many things to the ancient Celts. One of the most important meanings was the cycle of life or the life force. They reinforce the notion of a season or cycle and are often used in walking meditations. Spirals used in nature have a two-fold effect – they have a profoundly energizing winding effect or an unwinding, clearing effect while encouraging a meditative state and deeper awareness to help work out deeply rooted issues.

The second kind of spiral is created from the Fibonacci sequence that unfolds from the golden mean. The most basic understanding of the Golden Mean Spiral is that it connects the earth and the heavens. The Fibonacci sequence is reflected in the Milky Way Galaxy and can be seen everywhere on earth such as in the pattern of a sunflower, the spiral pattern of a shell, the branches of trees, and it is present in the many ratios of the human body. This spiral can be seen as a connecting symbol that signifies universal gnosis and the oneness of all living things on earth and in the heavens. 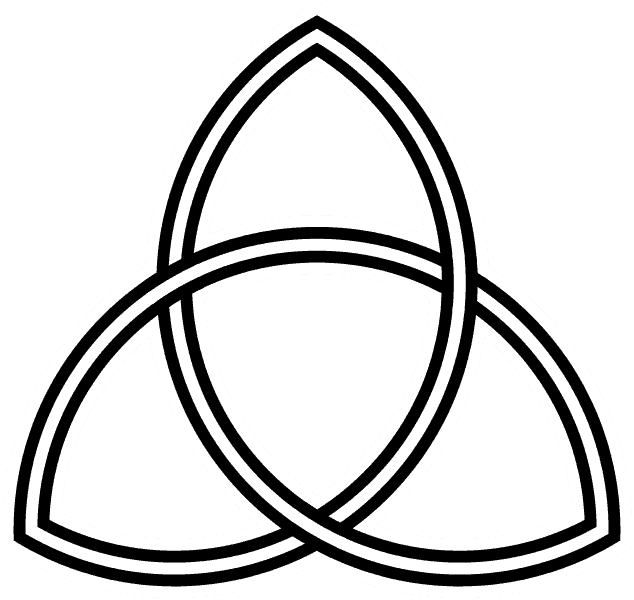 This is another ancient druid symbol drawn from sacred geometry that has profound implications. It is reflected in various forms of religious art and symbolism. It literally means “the bladder of a fish" and represents the union of many things such as between humans and nature, male and female, light and dark, and heaven and earth. It is often used to represent unity with the land we walk upon and a sacred promise or pact between individuals and the land they serve. No discussion of sacred symbolism can be complete without mentioning the ancient Awen symbol. Although not nearly as ancient as the three symbols mentioned above, the simple Awen symbol carries profound energy of creative awakening and divine inspiration. With its 3 rays of light, the Awen symbol reminds us of the all-important sacred number of 3 in Druidry. It can have many meanings such as the three realms of land, sea, and sky, the upper, middle and underworld of earth, or the three grades of Druidry – the bard, the ovate and the druid. This symbol is particularly good for areas or workspaces where you need creativity to flow. For example, the Awen symbol was often used near a fire pit where bardic arts were shared.

Awen is a Welsh word that describes the spark of creativity, illumination, or divine inspiration that sparks an idea and gives it form. The ancients drew upon the Awen symbol to compose their beautiful music and stories. Today we can draw on the energies of the Awen symbol as part of our creative path in things such as dance, song, crafting, music, painting, knitting, baking, and many other areas of life that are important for a happy and fulfilling life.

This symbol is particularly good for land protection and was specifically developed by a pagan group for use against fracking and near gas wells. This is a fairly new symbol that is actively being used around the world by many to energetically address the effects of fracking activities on the land. The Warrior’s Call symbol acknowledges the suffering and pain experienced by the land when it is under duress such as the threat of fracking.

Acorns have a rich and deep symbolism in Druidry. The word ‘druid’ literally translates to ‘oak knowledge’ which traditionally dealt with the survival of the ancient Celts. While that can still be true today, it is used in a much broader sense such as the knowledge of organic growing and harvesting of food, the knowledge of foraging in the wild for healing plants, and the knowledge of permaculture and sustainability. Oak knowledge also includes the stories, spiritual traditions, and myths of the ancient druids. As Druidry is a living spiritual tradition, oak knowledge can also be seen as an understanding of how nature can help us to solve the substantial challenges we experience in the 21st century.

The seed of the acorn is a Druid symbol of growth and unlimited potential and in its dormant state, it reminds us that we too need periods of rest and periods of growth. When we look at the symbol of the oak it helps us to understand the importance of living with grace and harmony within the different seasons. It also teaches about our own potential by showing how the mighty oak grows from a tiny seed into an entire forest. The massive root system of the oak tree that is only partially seen is as wide as the tree is tall. This teaches that, just as the roots of the oak, there is more to spiritual living than can be seen on the surface and even though the roots can’t be seen, they have a significant influence on our lives.

These are just a few of the many, many symbols from the ancient mystery traditions that can be used for different purposes on a druid’s path. Discover the ones that are of particular interest to you on your personal journey into Druidism.